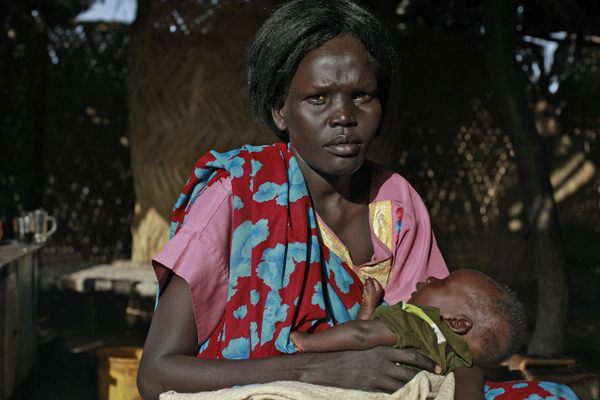 Aluel, a single mother of four, with her youngest child.

Rosamond Bennett, Chief Executive of Christian Aid Ireland, recently returned from South Sudan where she witnessed the hopelessness and hunger faced by millions in the conflict-torn country.

She described the pain in the faces of mothers whose children were starving, as ‘devastating.’

This Christmas, for every pound donated to the Christian Aid Christmas Appeal, the UK Government will also give a pound, meaning even more mothers and children under-five across Sub Saharan Africa will be saved from the life-threatening effects of malnutrition.

Rosamond said: “In South Sudan, I witnessed intense poverty. In the villages I visited, people are eating just one meal a day, made with only one ingredient. After months and months of living like this, energy levels are low and many people, especially children, are suffering from malnutrition.

“Seeing how hungry and malnourished some of the babies are and then the pain in their mother’s faces, who know they have no food for them, was devastating. Some of the people told me that they know they won’t be here next spring. Recent heavy rains destroyed their crops, which they were depending on. They said, Christmas is non-existent for us this year.”

Earlier this year, famine was declared in parts of South Sudan: the first time it was declared anywhere in six years. More than three years of conflict had displaced nearly four million people, disrupting harvests and leading to devastating food shortages. Although the famine was averted, the crisis in South Sudan has reached unprecedented levels – nearly six million people are facing severe food insecurity. If left untreated, acute malnutrition – the most extreme form of food crisis – can lead to death. 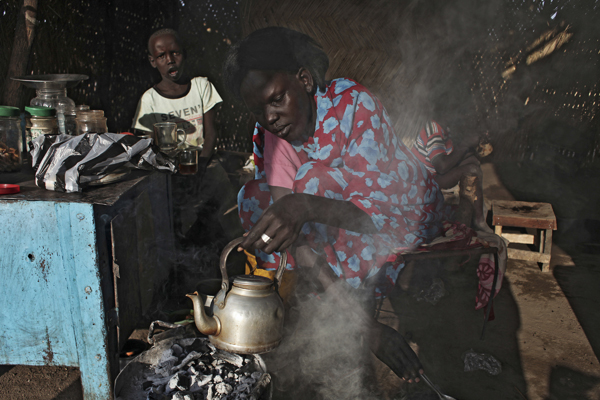 Aluel at her tea kiosk preparing for the day in Nyamlel, Aweil West.

Aluel used to run a small business selling tea and bread at her local market, which provided enough money to feed her family.  As the situation in South Sudan deteriorated, inflation rose to 800 per cent, meaning her earnings could no longer buy enough food to put on the table.

The mother-of-four could only provide one meal a day for her family, and sometimes that meal would consist of nothing but leaves. Christian Aid partner organisation SPEDP (Support for Peace and Education and Development Programme) is providing cash vouchers to people, like Aluel, struggling with acute malnutrition in South Sudan, so they can buy essential food in local markets to help their families recover.

“Before Christian Aid intervened, life had become very difficult. As a family, we urgently needed help,” said Aluel.  With support from SPEDP, she received cash vouchers, allowing her to buy enough food to feed her children.

“I saw the health of my children improve drastically as they then started eating three meals a day,” she added.

Your donation could help Christian Aid prevent many thousands of unnecessary deaths from malnutrition. Just £5/€5.67 could provide a cash voucher to provide enough food for a family for four days, and £150/€140 could provide 10 families with fishing gear.

Donations made to the Christmas appeal between 6 November 2017 and 5 February 2018 will be matched up to £2.7 million through Aid Match. The UK Government’s match will fund Christian Aid’s work in South Sudan.