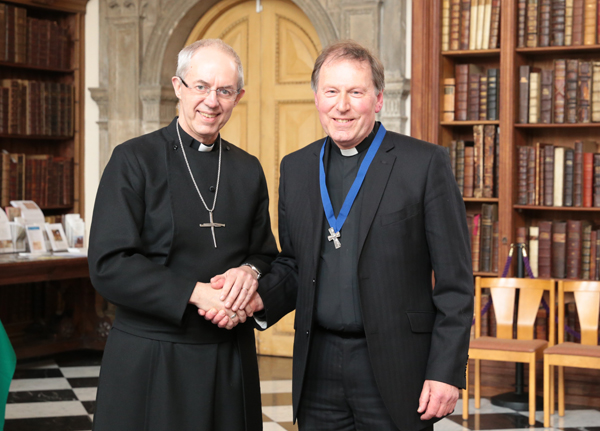 The Rev John Mann, right, former Dean of Belfast, with the Archbishop of Canterbury, the Most Rev Justin Welby, following the presentation of The Lambeth Cross.

Former Dean of Belfast, the Rev John Mann, has been awarded The Lambeth Cross by the Archbishop of Canterbury for his ecumenical work in Belfast.

The Most Rev Justin Welby presented the Cross to John at a ceremony in Lambeth Palace, London, on April 6.

John, spent much of his ministry in the Diocese of Connor and is a former rector of Ballyrashane and Kildollagh. Cloughfern and St John’s, Malone. He was accompanied to the ceremony in Lambeth Place by his wife Helen.

John was Dean of Belfast from 2011 until he left in September 2017 to take up the post of team rector of the Parish of Swanage with Studland.

The Award Citation reads as follows:

The Very Reverend John Mann – The Lambeth Cross for Ecumenism, for courageous and visionary leadership which affirmed diversity, fostered healing and made Belfast Cathedral a place of welcome as a sacred, civic space at the heart of a divided city. 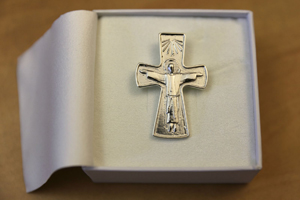 John Mann’s six-year tenure as Dean of Belfast was marked by building relationships and fostering a sense of community within the regular congregation. In 2017 he installed the first Roman Catholic priest as an ecumenical canon, alongside previously installed Presbyterian and Methodist ministers. The Choir School initiative was his vision, in partnership with three north Belfast schools (one Protestant, one Catholic and one integrated). The cathedral music department takes responsibility for teaching music in the schools and identifies boys and girls who are then trained to sing the services in the choirs of the cathedral. They attend practice in the context of an after-school homework club. Belfast Cathedral became a focus for civic events and as a sacred civic space benefited from the patience, grace and leadership of John Mann. He worked tirelessly with other religious leaders in the city and made a profound contribution to the civic understanding and acceptance of the concept of a Cathedral Quarter, ensuring that the cathedral remains at its heart. In his last three years there were congregations of between 800 and 1000 for Evensong and Compline on Culture Night and thousands more visited the cathedral. Guided tours and school visits became regular daily features, so too the daily offices. Over his tenure as dean John Mann raised over a million pounds for local charities through his pre-Christmas (Black Santa) sit-out for charity. In February 2017, at the Good Samaritan Service, the Dean distributed £230,000 – the largest sum raised to date, passing the target by some £30,000.

Christians from Africa, the Far East and the UK were among the recipients of the 2018 Lambeth Awards presented by the Archbishop of Canterbury.

The Awards, launched by Archbishop Welby in 2016, recognise outstanding service in different fields, including those of the Archbishop’s ministry priorities of prayer and the Religious life; reconciliation and peacebuilding; and evangelism and witness.

To learn more about this year’s Awards, visit https://www.archbishopofcanterbury.org/news/latest-news/archbishop-canterbury-presents-2018-lambeth-awards 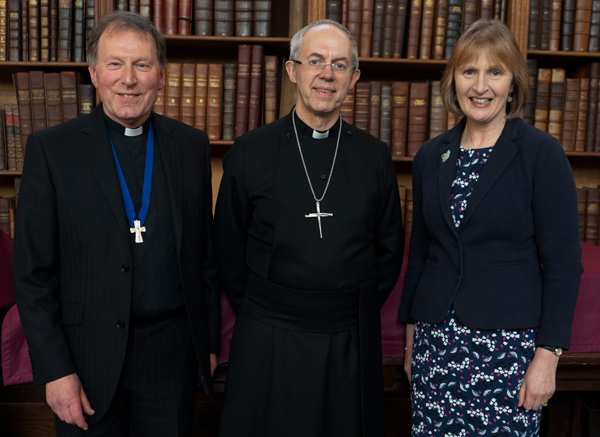