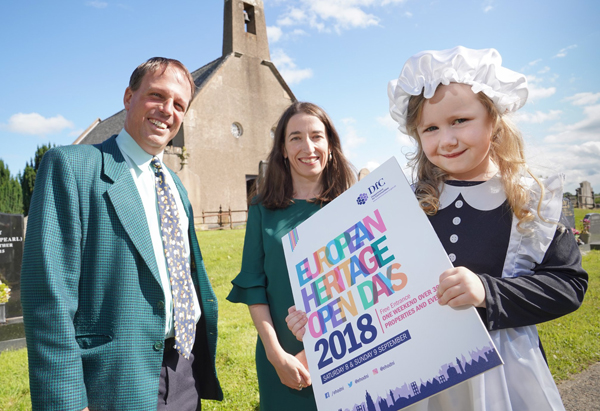 As part of its 350th anniversary celebrations, The Middle Church, Ballinderry, will host bus tours focused on the historic church during the weekend of European Heritage Open Days.

The tours, on Saturday September 8, will start at Ballinderry Church Hall from where visitors will be taken to Laa Loo graveyard at Portmore to see the ruins of the original church which the Middle Church replaced in 1668.  Then it is on to The Middle Church for a short talk on the church itself.

The tour continues at  Ballinderry Parish Church which was built in 1824 to replace The Middle Church, and which holds the coat of arms of Charles II, said to have hung in Lord Conway’s Castle at Portmore.

There will be refreshments in the Church Hall at the end, and visitors can view an exhibition of photographs and memorabilia showing parish life through the years, along with other items of interest.

Tours begin at 10am on September 9 and will continue through the day with the last tour departing at 3pm. Each tour will last approximately one hour. 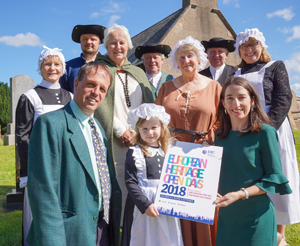 Launching the 2018 EHOD programme at The Middle Church. Photo: Department for Communities.

The following afternoon, Sunday September 9, there will be a special a service at 3.30pm in The Middle Church to mark the 350th anniversary and to look with hope to the future. This will be followed by afternoon tea in the Church Hall.

Services are held in The Middle Church during July and August at 7pm. The last evening service will be this Sunday, August 26. The church is exactly as it was in 1668, with no lighting or toilets. After the 350th anniversary service, it will only hold services on the Sunday before Christmas (a carol service) and on Good Friday, with regular Sunday evening services resuming next summer.

The historic church was selected to promote the launch of this year’s European Heritage Open Days. The launch was attended by the Director of Historic Environment Division at the Department for Communities, Iain Greenway, and Rosemarie McHugh, Director of Product Development, Tourism NI.

Follow the link at the top of the page to see other churches in Connor Diocese taking part in this year’s European Heritage Open Days.

A brief history of The Middle Church

Jeremy Taylor’s Church, known as The Middle Church, is situated between the ruins of the pre-Reformation Church at Portmore (also known as Laa Lou) and the Parish Church at Upper Ballinderry.  Building commenced in 1664 and the church was completed and consecrated in 1668.

Jeremy Taylor, after the execution of Charles I to whom he was chaplain, was brought to Ulster and resided in Portmore near Lough Neagh.  At the restoration of the monarchy in 1660, he proceeded to reinstate Prayer Book worship by restoring the church at Portmore, but the local people did not attend.

He therefore conceived the idea of building a church in a more central position in the Parish.  The roof timbers, three-decker pulpit and pews from the church at Portmore were used in the Middle Church.

Bishop Taylor did not live to see the Middle Church consecrated.  He died in 1667 aged 54 and is buried in Dromore Cathedral.

On the erection of the new Parish Church in 1824, the Middle Church fell into disuse and became dilapidated.  In 1902 Mrs Samuel Walkington restored the church as a memorial to her late husband.

The Middle Church is regarded as one of the finest examples of a plantation church in Ulster and illustrates the conditions under which worship was held 350 years ago.  It has featured in many television programmes including the BBC television series Dan Cruikshanks’ Written in Stone.