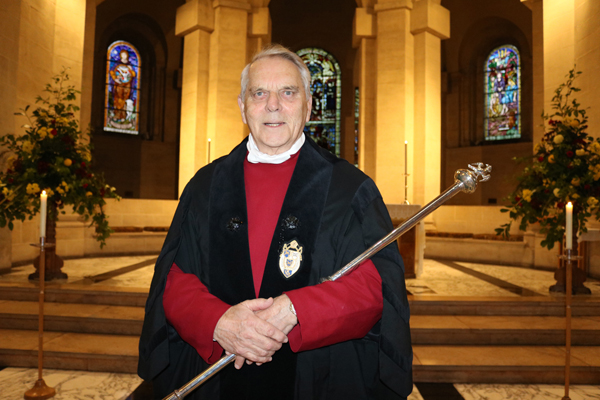 Mr David Alexander, who has retired as head verger at Belfast Cathedral after almost 20 years.

After almost 20 years on the verging team of Belfast Cathedral, Mr David Alexander has stepped down.

David retired on December 30. In the last two decades he has served in St Anne’s as a steward, crucifer, tenor lay clerk, verger, Synod member, parochial nominator and Board member.

David’s love for St Anne’s Cathedral began almost 70 years ago when, as a boy chorister, he was introduced to and enjoyed the formality and the high standard of liturgy and music.

He experienced the talents of all the Masters of Choristers / Organists who have worked in St Anne’s since the Cathedral was built, and served under three. David also witnessed the work and mission of seven Deans.

Born in Banbridge in 1941, David is a past pupil of Oranges Academy, Belfast, and the Royal School, Armagh. His career took him to sea, first as a cadet and then as an officer for 18 years. His main naval qualifications were achieved at John Moore’s University in Liverpool.

Soon after obtaining his Master’s / Captain’s Certificate, David was appointed as a Marine Pilot for Belfast and other local ports, a position he held for 26 years until his retirement.

In 1969 David featured in a BBC documentary as the 2nd Officer / Navigator on the ship SS Carrigan Head which won the annual race to Chicago in the Great Lakes after the winter freeze up – not the only time that he was on the winning ship.

David married Helen in 1968. They have a son David and daughter Suzanne, and three grandchildren. 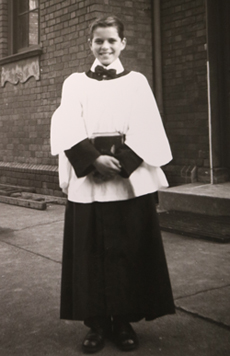 Mr David Alexander, who has retired as head verger at Belfast Cathedral after almost 20 years, pictured when he was a boy chorister at the Cathedral.

David was asked to help out on the Cathedral verging team by Dean Houston McKelvey in 2001, and that ‘helping out’ soon became permanent.

“The verger has so many little things to check on, the colours (liturgical) lighting, heating etc, preparing for different types of services, leading the choir procession and the clergy,” David explained.

“I like the dignity of the role, and I like trying to do everything right. I have verged for Prince Andrew, the Earl of Wessex, senior clergymen including the Archbishop of Canterbury, and senior politicians.”

A dedicated family man, David’s hobbies include water colour painting and the Anglican Church, particularly its liturgy and tradition of organ and choral music. David and Helen still sing in a local Belfast choir. He is also known to fly light aircraft and gliders!

David said he felt the time was right to retire as he would like to spend more time with the family and enjoy his grandchildren.

“I would like to thank the clergy, congregation and sextons for their help and encouragement over the years, especially those who helped with linen laundry, coffee cups, candles etc,” David said. “A special thanks to the team of volunteer vergers who supported me throughout and willingly turned out for services when requested.”

Expressing his gratitude to his wife Helen, David said his duties in the Cathedral were only possible because of her support and help. “Helen herself worked carefully and quietly in the background so a special thank you to Helen,” he said.

The Dean of Belfast, the Very Rev Stephen Forde, paid tribute to David, saying that since he arrived as Dean 10 months ago, David had been ‘ a constant source of advice and guidance.’

“He has prepared for services both large and small. Each week he has ensured that everything is in its correct place, from microphones to communion wine, and from Deans to Archbishops!”

Dean Forde added: “David has almost 20 years of experience behind him as a Cathedral verger, but each service has always been prepared for with meticulous detail. He has also been a team leader, organising and guiding the other vergers, acolytes and crucifers in their weekly duties.

“As Dean I will miss David for both his accumulated wisdom, and his gentle kindness. He has been to me, as to previous Deans, a real support to ensure the smooth working of many Cathedral services across the decades.”

David and Helen will maintain their close relationship with St Anne’s as members of the Cathedral congregation.