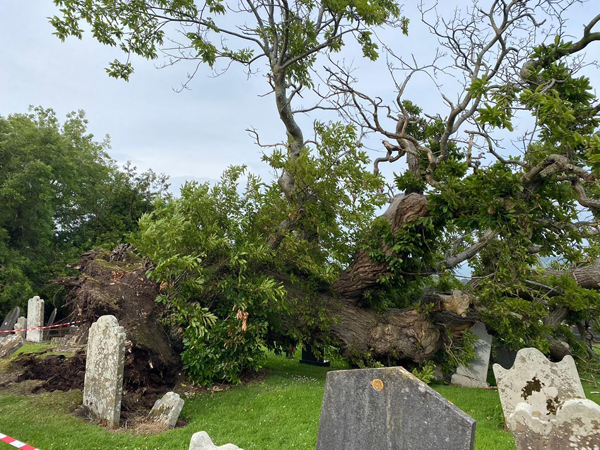 The ancient tree collapsed in the graveyard of St Patrick’s, Cairncastle.

A little piece of history came crashing down in the early hours of Thursday June 25, in the form of an ancient Spanish Chestnut Tree in the graveyard at St Patrick’s Church, Cairncastle.

The tree, also known as the ‘Armada tree,’ has graced the graveyard for centuries.

It is widely believed that the tree grew on the spot where a shipwrecked Spanish sailor was buried at the time of the Armada. According to local folklore, the sailor’s body was washed up in Ballygally Bay and brought up to the churchyard for burial. The tree then grew from a chestnut in his pocket – chestnuts were eaten by sailors to ward off scurvy on their long voyages.

It is certainly true that many Armada ships were wrecked off the coast of Ireland and the grave of another drowned Spanish sailor exists in nearby Glenarm. Analysis of the tree found it dates back to the 16th century, also giving credence to the local legend. 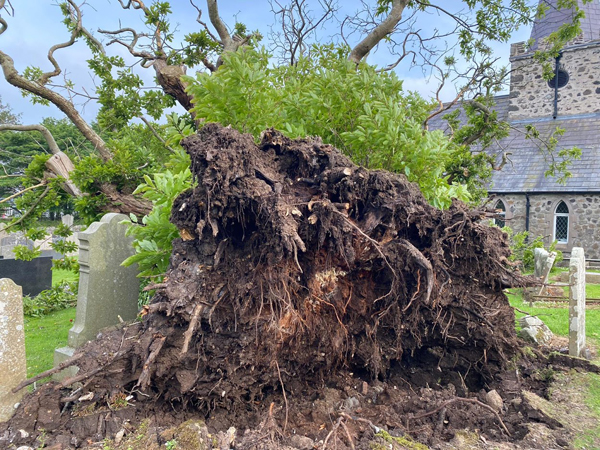 The ancient tree was suffering from root disease.

The Rev Philip Benson, rector of Kilwaughter and Cairncastle, said that CCTV footage showed the tree falling around 5.30am on Thursday. There was no wind at the time, and a tree surgeon has diagnosed that the ancient tree was suffering from root disease.

A popular attraction for tourists both local and from abroad, the area around tree has been cordoned off for health and safety reasons. “The tree has come to rest on top of a number of graves and headstones, so we need to act quickly,” said Philip. He added that families whose graves are affected have been advised of the situation.

The tree is to be looked at again by tree surgeons, and an archaeologist is due to examine the site where it grew. “The roots will have disturbed whatever lies below, but, if we have permission to look closer, it would be wonderful if we find something relating to the Spanish sailor,” Philip said.

He added the parish would be taking advice from experts on whether it might be possible to reseed further trees from cuttings from this tree, but said that whatever happens, this famous Spanish Chestnut will remain part of the parish. 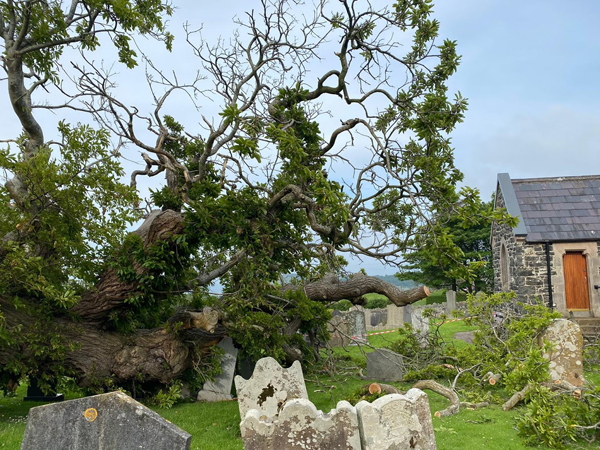 “We hope that the smaller branches can be crafted into carvings, and as there is quite a bit of the trunk left it could be turned into furniture or doors for the church – there is even a suggestion that it could form the basis of a sculpture of a Spanish sailor, but these are just ideas at this stage. We do not even know if the wood will be suitable for carving or turning.

“The tree is very well loved and the parish will want to mark it.”

In 2017, the chestnut was named runner up in the Woodland Trust’s ‘Tree of the Year’ competition, with a panel outlining its story installed at the top of Larne’s Main Street.

Wider interest in the Armada legend saw the tree become something of a tourist attraction. “It’s amazing how popular it was,” said Philip. “With the Game of Thrones connection nearby, we’ve had people make a detour to go by the church and photograph the tree.” 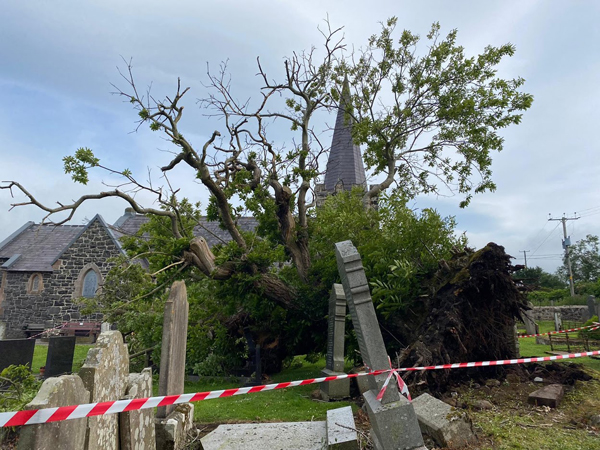 The area around the Spanish Chestnut tree is cordoned off for heath and safety reasons.