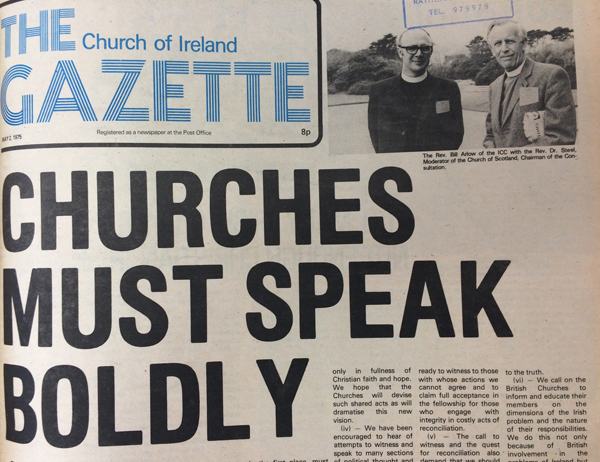 The final 2020 Archive of the Month from the RCB Library is an examination of the 1970s through the lens of the Church of Ireland Gazette, the Church’s weekly newspaper, in conjunction with the online release of all editions for that decade – 1970-79 inclusive.

In contrast to the three previous presentations in the Library’s Borderless Church series, which have been written by academic historians, the new 1970s presentation is the work of someone who was actively involved from within the central Church of Ireland structures, with first-hand experience of the challenges it faced during this decade.

That person is David Bird, a retired farmer from Cobh, Co Cork, who as a lay member of the Church served for a number of years on the Cork, Cloyne and Ross diocesan synod and several diocesan committees, and additionally represented the diocese on the central General Synod. He was also a member of the Church’s Standing Committee and the Role of the Church Committee, the latter originally formed in 1969, when it established itself as distilling the various views of its members from widely different backgrounds and provide the considered Church of Ireland viewpoint on the political, social and economic issues of the day.

As his text makes clear, these occurred as a ‘darkening cloud was gathering over the island of Ireland’ – the intensifying ‘murder and mayhem’ characterising this phase of The Troubles.

Mr Bird writes: “Most of the bombings, shootings and murders occurred in the North… the pages of the Gazette are full of the events of this period. … Analysing the paper through the years makes very sad reading, with numerous examples of painful tragedies.

“In July, nine people were killed in Belfast including 14-year-old Stephen Parker, son of the Missions to Seamen Chaplain the Rev Joe Parker (28/7/72). The Gazette stated that hundreds of Protestants were victims of violence (24/11/72).

The decade ended with some terrible events in 1979 – the killing of Airey Neave in April, the killing of 18 British soldiers at Warrenpoint, on August 27, and the murder of Earl Mountbatten in September. A week later, the paper reported that the parish church in Dungannon had been bombed for the 13th time.

Yet, as the presentation also clearly shows, green shoots of hope began to emerge with a growing desire for peace throughout the island such the ‘Prayers for Peace’ service in held in St Patrick’s Cathedral, Dublin, in February 1972, attended by 3,000 people; public support for the ‘Witness for Peace’ movement sponsored by the Rev Joe Parker (2/3/73) who had lost his son the previous year.

Peace rallies are also covered, including a Peace Walk in Dublin with 15,000 taking part while the Gazette itself launched a ‘Peace Think-in’ in the December 12 1975 edition, inviting people to contribute (in 300 words) how the Churches could promote peace in Ireland.

There was good coverage too of the efforts of the four Church leaders, including the Ballymascanlon talks, and their collective launch of the Churches Peace Campaign ‘Think-Pray-Talk-Peace’ in 1974, while at the grassroots level, the mediation work of a group of churchmen who met with representatives of the IRA in Feakle, Co. Clare, in led to a two-week ceasefire.  Aware of the potential of the Feakle talks, the Gazette headed its editorial of January 3 1975, ‘A ray of hope.’

Whilst the editorials advocated leadership, other articles and letters published in the paper began to initiate ideas on how to bring peace. In March 1972, for example, David Bleakley had set the scene by stating that Christians should spearhead reconciliation, while the letter sent by Senator Trevor West and published June 7 1973, contained what Mr Bird describes as ‘the germ of the conditions that would eventually bring peace to Ireland’ – the importance of initiating and achieving North-South agreement on an administration, which proved to be a core part of the Sunningdale Agreement and subsequently the Good Friday Agreement alongside a cross-community Northern Ireland Executive.

These issues and many other contemporary issues are covered, Mr Bird’s forensic analysis made possible by searchable access to the digital files.

The new presentation further emphasizes the value of the Library’s long-term project to digitize and make freely available the complete run of the Church’s all-island newspaper, the Church of Ireland Gazette (in print since 1856), and has again been made possible with the support of the Irish Government’s Reconciliation Fund, administered by the Department of Foreign Affairs.

To search and view all the other editions of the Gazette from 1856 up to 1979, go to: https://esearch.informa.ie/rcb.