Bello Duo sing at Morning Service in All Saints’, Antrim 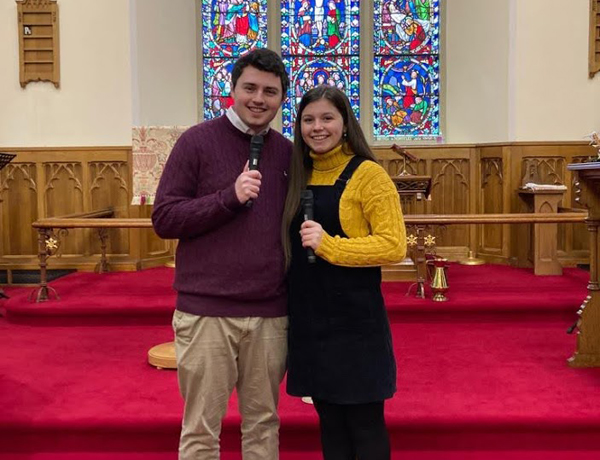 The talented Conor Taggart and Victoria McClements who sang during Morning Worship in All Saints’ Parish Church, Antrim, on January 31.

Singer Victoria McClements, daughter of All Saints’, Antrim, parish administrator Audrey, sang at All Saints’ Service of Morning Prayer on January 31, along with her boyfriend Conor Taggart.

The talented couple have recently formed Bello Duo and their version of Danny Boy hit No.1 on the iTunes vocal chart in South Africa!

The duo began singing together during the Clap for Carers initiative in last year’s lockdown, and Victoria, who suffers from a rare life-threatening illness, was shortlisted in Urban Jungles Heroes 2020, a national competition to find young adults who have helped in their communities during the pandemic.

During each Thursday’s Clap for the NHS last year, they sang a new song, and this was the impetus for their album ‘Out of Darkness.’ You can LISTEN  to some of their music.

On January 31 Victoria and Conor led the hymns during the Morning Service in Antrim, and also sang some songs from ‘Out of Darkness.’

Victoria has been making a name for herself for many years, having been selected to sing in St Paul’s Cathedral, London, for Her Majesty the Queen at her Diamond Jubilee Service in 2012, when she was just 11-years-old (related story). In 2019, she played the lead role of Kim in Miss Saigon in the Grand Opera House, Belfast, and in 2020 she starred in Grounding, a short film about young people and mental health which was shortlisted for a global prize by the World Health Organisation.

You can access the service in All Saints’ HERE – scroll to recordings of past events, 10.00am Morning Service January 31 2021.