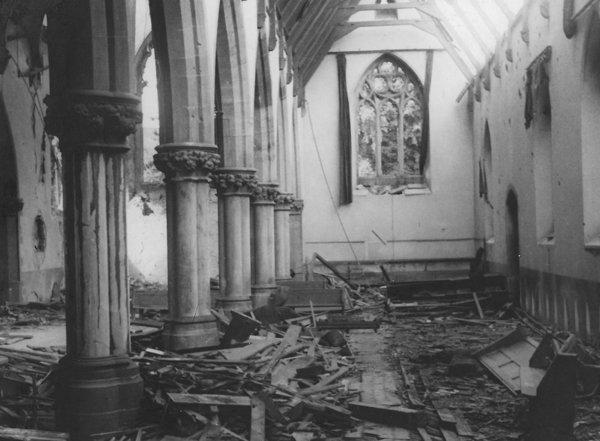 The evening of April 15 marks the 80th anniversary of the destruction of St James’ Parish Church in Antrim Road during the Belfast Blitz.

Recollecting the events, a post on the Facebook page of St Peter and St James’ Parish states: “The alert was sounded about 11pm and shortly afterwards anti-aircraft guns opened fire and bombs began to drop.

“Two bombs exploded, one in front of the pulpit and the other beside the font at the west end of the nave. Another bomb fell at the north east corner of the new parochial hall, and a land mine at the opposite side of the Antrim Road completed the wreckage of the building.

“Only the Bell Tower (dating from 1870) remained intact. Fortunately, the furniture and fittings of the chancel (such as the communion table and prayer desks) were salvaged, and in recent years these have been brought to St Peter’s.”

The photograph above shows the west end side aisle in St James’ after the bombing. The black curtains on either side of the window were installed in order to prevent interior lights revealing the location of the church at night. 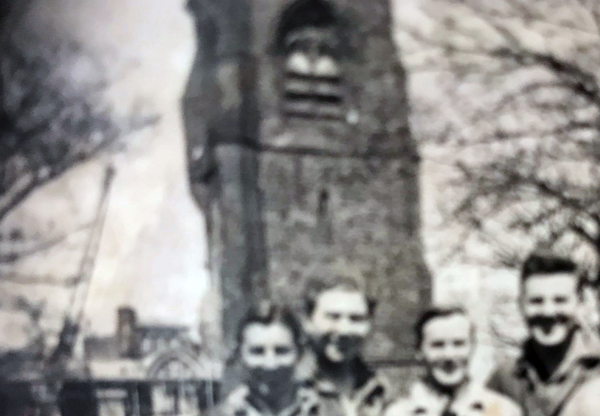 The photo below shows Brian Lacey, grandfather of the current rector of St Peter and St James’, the Rev Brian Lacey, on the far right, alongside his workmates at Ford Car Mechanics in Cliftonville Road, just opposite St James’. In the background, the bell tower still standing, and there is a crane in the background rebuilding the church.

Around noon on April 15, the bells of St Peter’s will ring out in commemoration of the events which led to the destruction of the original  St James’ building which opened in 1870. The church was rebuilt and consecrated on September 11 1954. It was erected on the old foundations and architecturally follows the original with modifications.  The parish was grouped with the Parish of St Peter in 1996 and they became one united parish in 2005. St James’ closed for worship on June 29 2008.