Death of the Ven Jack Patterson 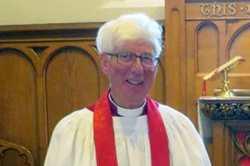 It is with sadness with record the death of the Ven Jack (John) Patterson, former Archdeacon of Dalriada, on Monday November 15.

Jack, 82, was ordained in 1965, and served in St Paul’s, York Street, Belfast; the Parish of Larne, Inver, Glynn and Raloo; and the Parish of Ballintoy and Dunseverick, where he was rector for more than 30 years until his retirement in 2005.

He was a Canon of St Anne’s Cathedral, Belfast, from 1997-2001, and in March 2001 was appointed Archdeacon of Dalriada. Until recently, Jack was Chaplain to Retired Clergy in Connor Diocese.

Sincere sympathy is extended to his wife Frances, children Mark, Fiona, Michael and Moira, his grandchildren, his brother Jim and sister-in-law Rosemary and the wider family circle.