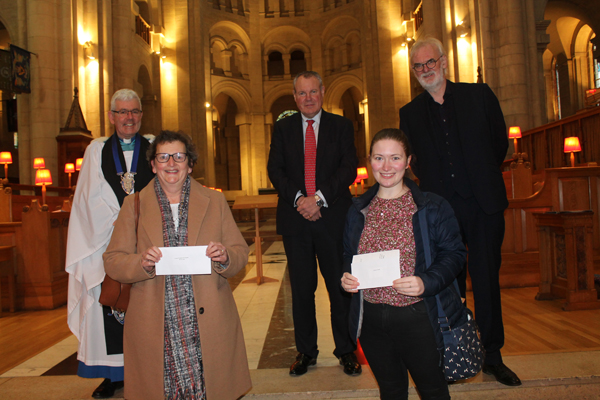 Representatives of St Michael’s Parish Church and Connor Youth Council who attended the Good Samaritans Service at Belfast Cathedral on February 6. They are pictured with Dean Stephen Forde, and special guests, Conor Burns, Minister of State for Northern Ireland, and Tim McGarry, comedian.

Representatives of more than 200 charities came together in Belfast Cathedral on Sunday February 6 for the annual Good Samaritans Service at which £150,000 raised by December’s Black Santa Sit-out was formally distributed. [Photo gallery].

Welcoming the charity representatives along with special guests Conor Burns, Minister of State for Northern Ireland; comedian and actor Tim McGarry; and singer Peter Corry, the Dean of Belfast, the Very Rev Stephen Forde, said it was a day for celebration.

“Today’s service is a celebration of everything that you, and the charities you represent, do day in and day out,” Dean Forde said. “The pandemic has been devastating for your ability to raise funds, and at the same time the pandemic has meant that the demands which you are each called to answer have risen dramatically.

“Today, your presence in St Anne’s Cathedral is an opportunity for us all to celebrate the work, the passion and the selfless giving which you constantly give to the causes which you champion.”

Dean Forde’s Black Santa Sit-out, a Belfast tradition which began more than 45 years ago, took place on the steps of St Anne’s Cathedral from December 13 until Christmas Eve.

People made donations in Black Santa’s barrel, and online donations were enabled through a dedicated Black Santa website, facilitated by Price Waterhouse Cooper, whose representatives were among the guests at Sunday’s service.

In January, when he announced that the 2021 appeal had raised £150,000, Dean Forde said this had exceeded his expectations in a year of restricted footfall, with many of the Cathedral’s major events cancelled because of Covid-19 restrictions.

He told guests at the service: “My thanks to every single person who contributed to the 2021 Black Santa Appeal. Some donated bags of coins collected over the past year and some wrote cheques for thousands.

“Without the amazing generosity of the people of Belfast and across this province, there would be no Good Samaritans Service, and there would not be £150,000 to give away today.”

He thanked the team behind the sit-out and the service, including the Canons who joined him on the steps, the people who counted and banked the donations, and those who put together the awards letters.

Introducing the special guests, Dean Forde said: “Conor Burns spent a chilly afternoon with me on the steps of Belfast Cathedral, learning the skills of being one of Black Santa’s assistants. This not only involved knowing how to operate the credit card machine, or cross the road to receive money from a passing bus driver, but this year also side-stepping some challenging questions about Covid vaccine policy and lockdown regulations. Political skill, along with warm socks, are definitely included in the Black Santa kit list!”

He described Tim McGarry as a long-standing friend of the Black Santa Appeal, and said Peter Corry had supported the appeal through his pre-Christmas concerts in the Cathedral.

During the service, Peter sang ‘The Long and Winding Road,’ and Tim hit all the right chords himself with an entertaining talk which touched with great wit on all things political. Finishing, Tim said he was proud to be a supporter of Black Santa.

Guests also enjoyed anthems from the Cathedral Choir. The organist was Tristan Russcher.

This year, in accordance with Covid-19 precautions, charity representatives were seated in a socially distanced manner around the Cathedral and did not come forward to receive their award as funds were transferred electronically. But the name of each of the 220 recipient organisations in the different categories were read aloud by Cathedral clergy. At the end of each section, the representatives of the charities named were asked to stand and were warmly applauded by all present.

The Dean’s focus for the 2021 sit-out was on organisations which work with refugees and those supporting people with a disability. Charity representatives had travelled from as far away as Fermanagh and the north coast to take part in the service, with grants awarded to groups working with children, young people, groups which serve the community, organisations working with families, some involved in medical research and support and, on an international level, Christian Aid.