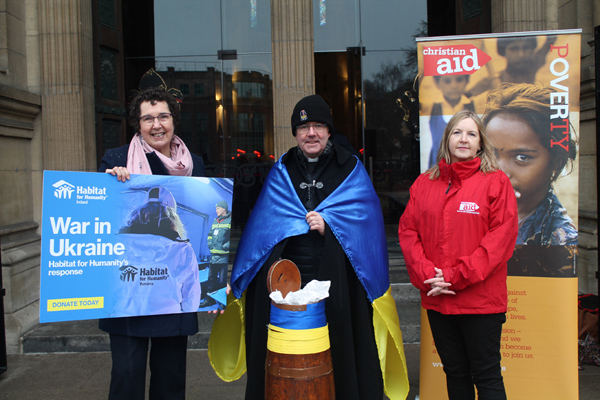 Anyone who wondered if spring-like weather may have taken the shine off the launch of Dean Stephen Forde’s unseasonal Black Santa Sit-out on Wednesday need not have worried.

For the lashing rain ensured conditions at this special sit-out for Ukrainian refugees made the three hours on the steps of Belfast Cathedral just as challenging as any day of the traditional Christmas sit-out.

But as Dean Forde said to journalists at the launch: “The inconvenience we have here is nothing to those people who are walking through the snow and the wind in Ukraine and through the surrounding countries.”

Both charities are also supported by the Church of Ireland Bishops’ Appeal. Habitat for Humanity has extensive experience of working in Poland, Slovakia, Hungary and Romania, and will be providing emergency provisions and accommodation to the thousands of refugees crossing daily from Ukraine into these nations. Christian Aid, now a member of the Disasters Emergency Committee, was established by the churches in the aftermath of World War Two. Working with partner churches across Eastern Europe, Christian Aid is channelling funds to the places and people where it is needed most.

This is not the first time Black Santa has responded to humanitarian crises in the world. In 1974, Dean Sammy Crooks collected funds for people who lost everything following major flooding in Bangladesh; and, in the wake of the Boxing Day tsunami of 2004, Dean Houston McKelvey raised almost £1 million to support devastated communities.

Rosamond Bennett said: “Christian Aid was set up by churches after World War Two specifically to offer humanitarian aid to refugees across Europe. We are delighted that the Dean of Belfast in the lead-up to Easter has launched this appeal to help refugees. It is like coming full circle – it was the churches who responded to that crisis after the Second World War when others couldn’t.

She added that Christian Aid specialised in peace-building and the money raised through the Black Santa Appeal would be used to not only respond in terms of health care, food and provision of other essentials, but also to lobby governments for an end to hostilities and to welcome refugees here on the island of Ireland.

“Habitat for Humanity would be known as a voluntary organisation and we find it very difficult to get support, yet we are on the ground in these countries which are welcoming two million refugees. This is an enormous encouragement for us in Ireland and for our colleagues in Poland, Slovakia, Hungary and Romania. They had not heard of Black Santa, but were overwhelmed when we explained what the Dean was doing.

“I just hope the public respond. Today in Warsaw we have colleagues at the train station matching refugees with temporary accommodation. This sit-out will raise funds to help us meet both immediate and long term needs.”

Dean Forde, wearing the traditional black Anglican cloak from which the ‘Black Santa’ tradition got its name, will be ‘sitting out’ and collecting donations each Wednesday from 12pm-3pm for the duration of Lent – another five weeks. Donations can also be made online on the dedicated Black Santa website: https://www.belfastblacksanta.org/. You can also keep up to date with the Dean’s sit-out vlog!