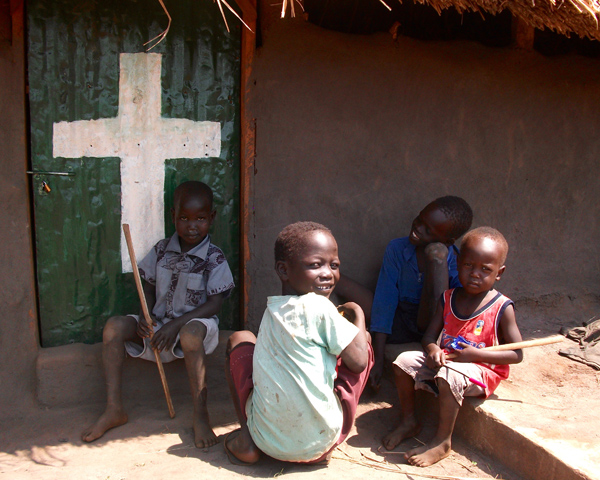 Internally displaced children in a camp in South Sudan. This camp is in Maridi Diocese.

Bishop Hilary of Yei this week made a direct plea to people in the Diocese of Connor to help alleviate suffering caused by ongoing civil war in South Sudan.

The two dioceses have been in partnership for almost 10 years. Donations can be made directly to Yei via CMS Ireland. Please see link below.

In a document outlining the seriousness of the situation, Bishop Hilary said more than 450,000 people have fled from the Diocese of Yei to refugee camps in northern Uganda alone, while others have gone to DR Congo. 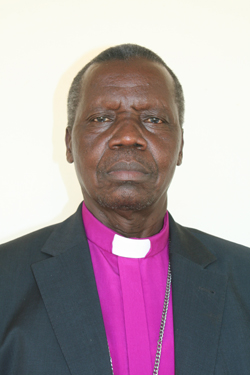 Bishop Hilary of Yei has appealed for the support of Connor Diocese.

“When I visited the mega refugee camp at Rhino Camp on March 5, I was so overwhelmed by the huge needs of the refugees to be fulfilled in almost every aspect of their lives,” Bishop Hilary said.

“The range of needs is from lack of poles for constructing their makeshift dwellings of plastic materials to churches.

“The refugees’ complaints range from insufficient rations of dry food to lack of schools at all levels for their children. There are many young people in these camps, all very idle and having nothing to do. Many of them are stressed and traumatized and are in great need for counseling services in trauma and psychosocial disorders.”

The Bishop said the huge numbers of young people in the camps is a worry.

“Their presence in these camps is a potential recruiting grounds for the rebel movements in South Sudan which is a threat to the future of this country,” Bishop Hilary stated. “This in turn will fuel the rebellion and prolong the war in South Sudan which means prolonged suffering of our people in refugee camps.”

The Bishop and his diocese has drawn up a list of priorities, and these include the need for secondary and vocational training. “We are most likely to lose out if some of the young boys and girls that have completed their O and A levels and are ready to join university do not get any opportunities to continue with their studies. The future for South Sudan will be bleaker than its now,” said the Bishop.

Yei Diocese has drawn up a Relief Emergency Assistance Programme (REAP) which outlines the key issues facing people both trapped within Yei town and in the refugee camps. This can be downloaded in full here.

Some of the key points of note are:

Following the outbreak of the crisis in Yei (July 2016) over 57,000 displaced people assembled at the Immanuel Cathedral grounds. The UNHCR later projected over 100,000 internally displaced persons were in immediate need of food, medicine and security. 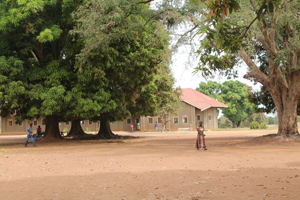 The grounds outside Immanuel Cathedral, Yei, pictured during a Connor visit in 2013, became home to more than 57,000 refugees following the outbreak of the crisis in July 2016.

“This gives an idea of how many people so far still remain in Yei under dire conditions of lack of security, food, water, medicines and medical personnel. With all roads blocked and all medical outlets in Yei abandoned, there is a looming threat to the lives of the internally displaced persons trapped within Yei town,” said Bishop Hilary.

These are mostly women, pregnant mothers, children, the old, the disabled and the destitute who could not run to the refugee camps in Uganda and DR Congo.

Bishop Hilary’s visit to the refugee camps in northern Uganda, particularly Rhino Camp, revealed that these camps are now home to 450,000 people.

They include children, teenagers and young men and women, all facing different problems. The children need better food, medical treatment and education to help them develop; the teenagers are traumatized and often resort to negative behaviour including drugs, alcohol and theft, while those in the 18-45 bracket are without their husbands and wives, and Bishop Hilary fears an increase in immoral behavior could lead to a rise in HIV/AIDS.

The major aim of REAP is to provide coping mechanisms to these different groups of the refugees from South Sudan. 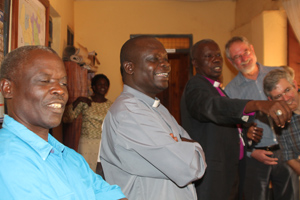 Richard Ali, Dean of Immanuel Cathedral, in grey shirt, who translated for the Connor team which visited in January 2013 – pictured here with team members in a happier time in Yei. Richard is currently trapped in Yei town.

In the document Bishop Hilary sets out objectives which include sounding the alarm to those outside Yei and in the wider world , and seeking immediate financial assistance to alleviate the suffering of the people of South Sudan ‘before we witness massive deaths especially in Yei town resulting from starvation and as well those in the refugee camps in northern Uganda.’

The diocese wants to increase education provision for children living in the camps, and provide play facilities for them.  “Apart from academic learning, REAP is designed to solicit for the provision of facilities/services that will occupy these children and make them begin socializing as a means of integrating them for a peaceful and tribe-less society,” said the Bishop.

The diocese also wishes to provide youth education and training, both vocational and academic.

The document names several Yei pastors who are considered to be at risk.

“When the crisis intensified in Yei, massive movement of civilians away from the town was already underway. Soon the whole of Yei with an estimated population of 750,000 people was like half empty,” it states.

“The majority of our pastors left with their flock and went into exile mostly to Uganda.”

But some remained, and currently the diocesan list of pastors inside Yei town contains 25 names including other church workers.

Bishop Hilary has not seen seven of his archdeacons or 100 of his priests since the crisis broke out last July, which he said has had a tremendous weakening of the church.

“The need of the pastors in the town is financial assistance. This will enable them to buy basic commodities like food, soap, salt, medicine if they can get and pay the fees of the children remaining in the town schools,” he said. 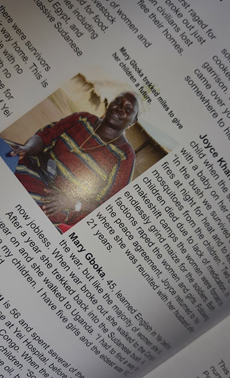 Mary Gboka Solomon, MU co-ordinator, whose story about the horrors she face in the last civil war in South Sudan featured in Connor Connections in 2011. Mary remains stranded in Yei town.

Perhaps what really makes the list of those diocesan pastors and staff trapped in Yei Town hit home is not just that it is a list of names, but a it is a list of friends, among them diocesan youth co-ordinator Amule, mentioned in this story from Bishop Alan Abernethy’s visit to Yei in 2013, and Mary Gboka Solomon, MU co-ordinator, whose story about the horrors she face in the last civil war featured in Connor Connections in 2011 (left).  Also Richard Ali, Dean of Immanuel Cathedral, who was also a great help with translating for the Connor team which visited in January 2013.

CMS Ireland has a fundraising appeal which will send donations directly to Yei.  Anyone wishing to ensure their money will be used in alleviating the suffering in Yei Diocese and among the people of Yei living in refugee camps can donate to the YEI APPEAL HERE.

CMSI has a general appeal for South Sudan, which will support areas including Yei, and you can donate to the SOUTH SUDAN APPEAL HERE.

CMSI is also providing opportunities to find out more about the crisis and to pray for the Church in South Sudan at three ‘drop-in’ prayer days  (10am to 2pm). Dates and venues are:

On Friday May 19, CMSI will host a special event about the South Sudan crisis and the Church’s response with guest speaker Bishop Anthony Poggo, the Archbishop of Canterbury’s Adviser on Anglican Communion Affairs and formerly Bishop of Kajo-Keji Diocese in South Sudan. Further details to follow.

Donations to South Sudan can also be made via Bishops’ Appeal and Christian Aid.